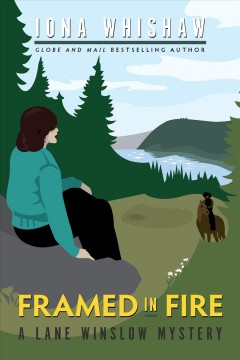 Framed in fire
Whishaw, Iona
A shallow grave, a missing person, and near-fatal arson keep Lane, Darling, and the Nelson police on high alert in the latest mystery in this Globe and Mail bestselling series. It's early spring 1948 and Lane arrives in New Denver to find that her friend, Peter Barisoff, is not at home. Instead, in a nearby meadow, she encounters Tom, an Indigenous man in search of his ancestral lands. Lane is intrigued. Unfortunately, once Peter returns home, the day takes a gloomy turn when the trio uncovers human remains next to Peter's garden, and Lane must tell her husband, Inspector Darling, that she's inadvertently stumbled into his professional domain--again. 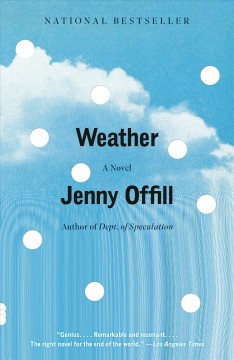 Weather : a novel
Offill, Jenny
Lizzie Benson slid into her job as a librarian without a traditional degree. But this gives her a vantage point from which to practice her other calling: she is a fake shrink. For years, she has tended to her God-haunted mother and her recovering addict brother. They have both stabilized for the moment, but Lizzie has little chance to spend her new free time with husband and son before her old mentor, Sylvia Liller, makes a proposal. She's become famous for her prescient podcast, Hell and High Water, and wants to hire Lizzie to answer the mail she receives: from left-wingers worried about climate change and right wingers worried about the decline of western civilization. As Lizzie dives into this polarized world, she begins to wonder what it means to keep tending your own garden once you've seen the flames beyond its walls. When her brother becomes a father and Sylvia a recluse, Lizzie is forced to address the limits of her own experience--but still she tries to save everyone, using everything she's learned about empathy and despair, conscience and collusion, from her years of wandering the library stacks . . . And all the while the voices of the city keep floating in--funny, disturbing, and increasingly mad. 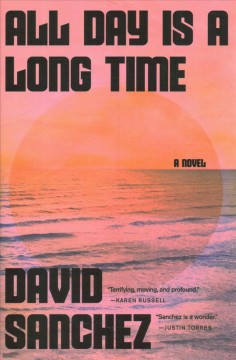 All day is a long time
Sanchez, David
"David has a mind that never stops running. He reads Dante and Moby Dick, he sinks into Hemingway and battles with Milton. But on Florida's Gulf Coast, one can slip into deep water unconsciously; at the age of fourteen, David runs away from home to pursue a girl and, on his journey, tries crack cocaine for the first time. He's hooked instantly. Over the course of the next decade, he fights his way out of jail and rehab, trying to make sense of the world around him-a sunken world where faith in anything is a privilege. He makes his way to a tenuous sobriety, but it isn't until he takes a literature class at a community college that something within him ignites. All Day is a Long Time is a spectacular, raw account of growing up and managing, against every expectation, to carve out a place for hope. We see what it means, and what it takes, to come back from a place of little control-to map ourselves on the world around, and beyond, us. David Sanchez's debut resounds with real force and demonstrates the redemptive power of the written word"-- 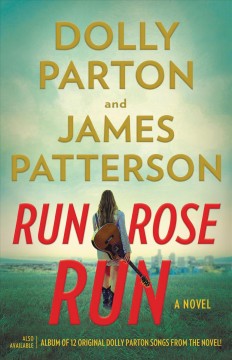 Run, Rose, run : a novel
Parton, Dolly
Every song tells a story. Nashville is where she's come to claim her destiny. It's also where the darkness she's fled might find her. And destroy her. 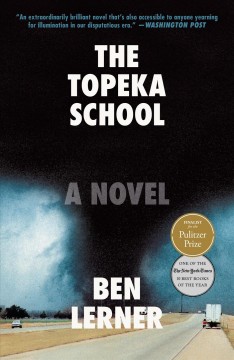 The Topeka school
Lerner, Ben
Adam Gordon is a senior at Topeka High School, class of '97. His mother, Jane, is a famous feminist author; his father, Jonathan, is an expert at getting "lost boys" to open up. They both work at a psychiatric clinic that has attracted staff and patients from around the world. Adam is a renowned debater, expected to win a national championship before he heads to college. He is one of the cool kids, ready to fight or, better, freestyle about fighting if it keeps his peers from thinking of him as weak. Adam is also one of the seniors who bring the loner Darren Eberheart--who is, unbeknownst to Adam, his fathers' patient--into the social scene, to disastrous effect. Deftly shifting perspectives and time periods, The Topeka School is the story of one family's struggles and strengths: Jane's reckoning with the legacy of an abusive father, Jonathan's marital transgressions, the challenge of raising a good son in a culture of toxic masculinity. It is also a riveting prehistory of the present: the collapse of public speech, the trolls and tyrants of the New Right, and the ongoing crisis of identity among white men. 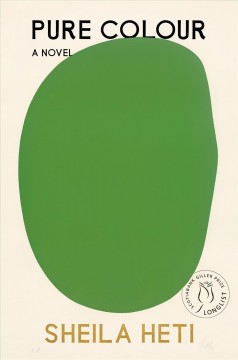 Pure colour
Heti, Sheila
"A short epic novel about art, grief, and love by Sheila Heti, the author of Motherhood and How Should A Person Be."-- Provided by publisher. 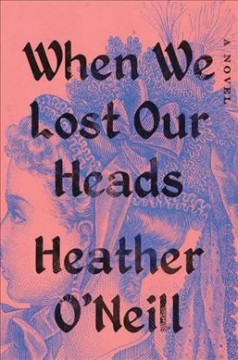 When we lost our heads : a novel
O'Neill, Heather
"A spellbinding story about two girls whose friendship is so intense it not only threatens to destroy them, it changes the trajectory of history. Marie Antoine is the charismatic, spoiled daughter of a sugar baron. At 12 years old, with her blond curls and her unparalleled sense of whimsey, she's the leader of all the children in the Golden Mile, an affluent strip of 19th century Montreal. Until one day in 1873, when Sadie Arnett, dark-haired, sly, and brilliant, moves to the neighborhood. Marie and Sadie are immediately united by their passion and intensity, and they attract and repel each other in ways that light each of them on fire. Marie with her bubbly charm sees the light and sweetness of the world, whereas Sadie's obsession with darkness is all consuming. Soon their childlike games take on a thrill of danger and then become deadly. Forced to separate, they spend their teenage years engaged in acts of alternating innocence and depravity-until a singular event unites them once more, with dizzying effects. And after Marie inherits her father's sugar empire and Sadie disappears into the city's gritty underworld, a revolution of the working class begins to foment. Each of them will have unexpected roles to play in events that upend their city-the only question is whether they will find each other once more. Traveling from a repressive finishing school to a vibrant brothel, taking readers firsthand into the brutality of factory life and the opulent lives of Montreal's wealthy, When We Lost Our Heads dazzlingly explores gender and power, sex and desire, class and status, and the terrifying power of the human heart when it can't let someone go"-- Provided by publisher. 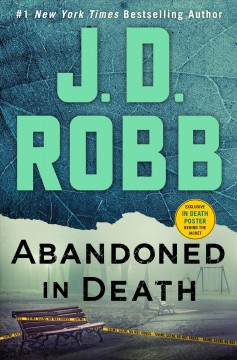 Abandoned in death
Robb, J. D.
"The woman's body was found in the early morning, on a bench in a New York City playground. She was clean, her hair neatly arranged, her makeup carefully applied. But other things were very wrong--like the tattoo and piercings, clearly new. The clothes, decades out of date. The fatal wound hidden beneath a ribbon around her neck. And the note: Bad Mommy, written in crayon as if by a child. Eve Dallas turns to the department's top profiler, who confirms what seems obvious to Eve: They're dealing with a killer whose childhood involved some sort of trauma--a situation Eve is all too familiar with herself. Yet the clues suggest a perpetrator who'd be roughly sixty years old, and there are no records of old crimes with a similar MO. What was the trigger that apparently reopened such an old wound and sent someone over the edge? When Eve discovers that other young women--who physically resemble the first victim--have vanished, the clock starts ticking louder. But to solve this case she will need to find her way into a hidden place of dim light and concrete, into the distant past, and into the cold depths of a shattered mind."-- Amazon. 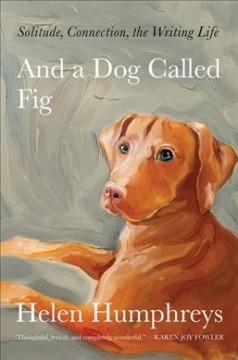 And a dog called Fig : solitude, connection, the writing life
Humphreys, Helen
An artist's solitude is a sacred space. But in the artist's quiet there is also loneliness, self-doubt, the possibility of collapsing too far inward. What an artist needs, Helen Humphreys would say, is a dog. This is a book about companionship and loss and creativity that is filled with the beauty of a steadfast canine friend and the restorative powers of nature. It is also a book about craft, divided into sections that echo the working parts of a novel. Just as every work of art is different, every dog is different - with distinctive needs and lessons to offer. 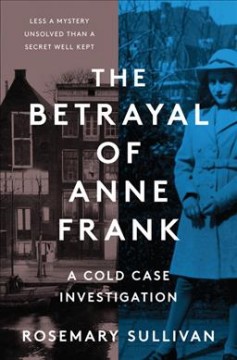 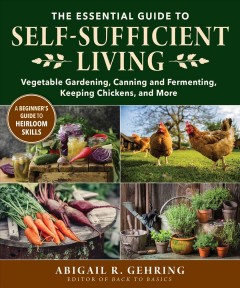 The essential guide to self-sufficient living : vegetable gardening, canning and fermenting, keeping chickens, and more
Gehring, Abigail R.
"Grow your own vegetables and herbs, indoors in containers or outside in a garden. Raise chickens or goats. Build a beehive. Make your own nontoxic cleaning sprays. Gehring's books on country living have sold more than 500,000 copies. In this book, she offers a guide to homesteading skills that is as charming as it is practical. Full of sweet illustrations and gorgeous photographs, step-by-step instructions for essential skills such as building a chicken coop are interspersed with country lore and old-fashioned tips and tricks"--Provided by publisher. 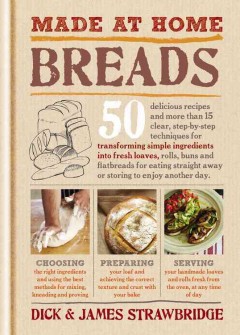 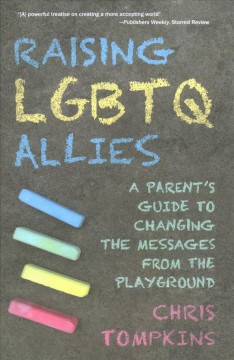 Raising LGBTQ allies : a parent's guide to changing the messages from the playground
Tompkins, Chris
Focuses on the prevention of homophobia, transphobia, and bullying before they begin. Encourages families to have open and authentic conversations in a practical, timely, and inclusive way. It also creates a dialogue with parents around the possibility they may have an LGBTQ child. 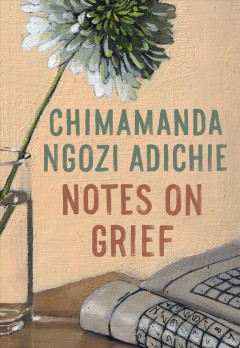 Notes on grief
Adichie, Chimamanda Ngozi
A work of meditation, remembrance, and hope, written in the wake of Chimamanda Ngozi Adichie's beloved father's death in the summer of 2020. As the COVID-19 pandemic raged around the world, and kept Adichie and her family members separated from each other, her father succumbed unexpectedly to complications of kidney disease. Adichie shares how this loss shook her to her core. She writes about being one of the millions of people grieving this year; about the familial and cultural dimensions of grief; and also about the loneliness and anger that are unavoidable in it.

Our databases have lots of professional information not necessarily found through the Web.  We also have loads of recommended websites.  Check out our Online Resources page for more information.